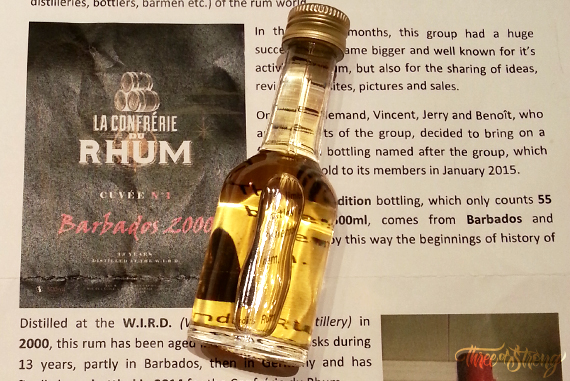 Past Friday I received a mysterious package from Luxembourg at home. This package contains a 5cl unlabeled bottle with a gold liquid and a press release with the title “La Confrérie du Rhum presents its Cuvée Nº1″…Wow!!!It’s an exclusive sample of a new rum!!!And it wasn’t sold yet!!!!

First of all, I want to talk about La Confrérie du Rhum. It’s a Facebook group. created by Benoît Bail in early 2013 and which just today reaches the 3800 members, all rum lovers and professionals of the rum world (salesmen, producers, distilleries, bottlers, barmen,…). In the last 18 months, this group became bigger and well known for it’s activity as forum, but also for the sharing of ideas, reviews, websites, pictures and sales. On general demand, Vincent, Jerry and Benoît (the hosts of the group) decided to bring on a first special bottling named after the group, which was sold today,  wednesday 15th of January. (I tell was sold…because this Cuvée nº1 was sold out in only 4 minutes!!!). 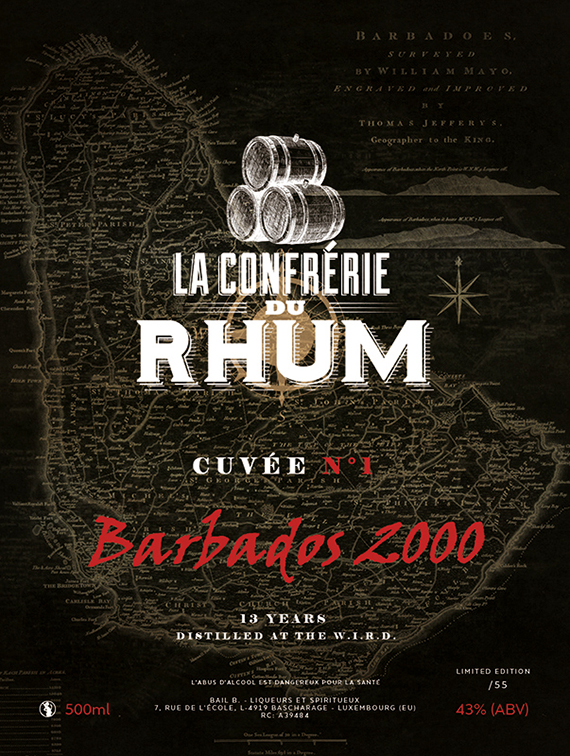 Talking about the rum, this is a limited edition bottling, which only counts 55 bottles of 500ml, comes from Barbados and remembers by this way the beginnings of history of rum. Distilled at the W.I.R.D. (West Indies Rum Distillery) in 2000, this rum has been aged in American oak casks during 13 years, partly in Barbados, then in Germany and has finally been bottled in 2014 for La Confrérie du Rhum.

The bottles have been waxed by Benoît Bail himself, to give them a better look and to combine the red wax with the red writing on the black label, which hides a map of the island in the back. I can’t judge the bottle by myself, because I only have a little sample, but it looks very nice in the pictures that I could see on the net.

Well, that’s my desired moment, I have a bit of time to taste that wonderful rum. I serve this gold liquid in my tasting glass and I smell it a bit. The first thing that I smell is the oak, the astringent smell of the tannins, after that I recognize the aroma of vanilla and ripe fruit, specially banana. In consecutive sniffs I also detect some spices on it with the predominance of black pepper.

Now, I’m ready to taste it! On the first sip I can see that it’s a smooth and dry rum, the black pepper and oak flavors invades my mouth, and in consecutive sips I could palate the vanilla and fruity notes but less intense than in nose. It’s a flavourful rum, not too sweet, with a long finish, my mouth has kept the flavor of the last sip for about 15 minutes. I also detect a flavor in the background that I can’t describe, I think it’s something herbal, vegetal notes that I can’t define or I can express with and adjective or word (maybe I’m a rookie tasting rums yet… :P).

I have bad news and good news about that rum review.

The bad news are that I could only taste a 5cl sample, I normally taste two or three times this quantity of a rum before I write a review…but it’s an exclusive rum and I understand that in that case I have to write my review with these conditions.

The good news?Well, I have fast fingers and I know how to move on internet and yes I was able to buy a bottle of rum online in less than 4 minutes 😉 When this Bajan jewel arrives at my home maybe I could readjust this review…or not… 😉

Before finish this review I want to thank to  Vincent, Jerry and specially Benoît Bail for support my blog and trust on my work. Merci mon amis!!!!