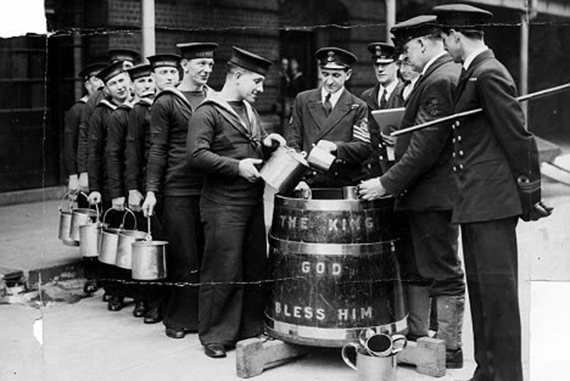 The 31st of July 1970 was the last day on which the Royal Navy issued sailors with a daily rum ration: the daily tot, for that reason, this day was known as The Black Tot Day.

Originally, in the 17th century, the English sailors drinks a gallon of beer daily, but the difficulty of storage the larges quantities of beer was the reason to change to a half pint of rum as a daily ration in 1655. The problems with the drunkeness on board makes the Admiral Edward Vernon regulate the ration, and it was mixed with water in a 4:1 water to rum proportion divided in two servings per day. 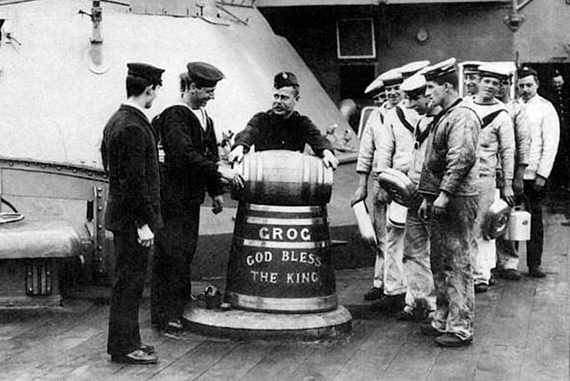 In 1824, because of the discipline problems, the daily tot was halved to a quarter pint, and in 1850 the Admiralty’s Grog Comittee tried to eliminate it completely, but finally only halved it to an eight of a pint per day without the evening serving of the ration. The ration ends in 1881 for officers and in 1918 for warrant officers.

The 17th of December 1969, The Admiralty Board issued a written saying:

“The Admiralty Board concludes that the rum issue is no longer compatible with the high standards of efficiency required now that the individual’s tasks in ships are concerned with complex, and often delicate, machinery and systems on the correct functioning of which people’s lives may depend”. 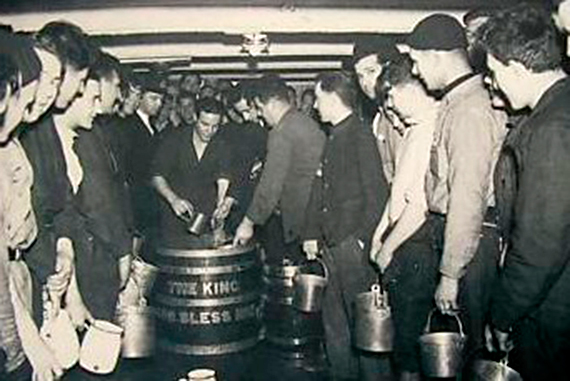 This led to debate about and finally, a day like today 44 years ago, the last rum ration was poured as usual at 6 bells in the forenoon watch (11 am), many sailors were wearing black armbands in tribute. Black Tot Day was born and each year the history of the British Navy is celebrated.

I was looking online about some celebrations, related with rums, scheduled for today and I found the Pusser’s Black Tot Day 2014 celebrations with some events in UK and Florida.

In Tiki Central I also found a Black Tot Dinner in 320 Main Seal Beach, where you could taste a 1oz pour of The Black Tot Last Consignment plus dinner featuring cocktails and a history of  Naval Rum presented by Matt “Rumdood” Robold.

I also received a mail from Smuggler’s Cove about their 5th Annual Black Tot Celebration, which invites to join them at 6pm at the cove, they’ll be ladling out Demerara Rum (made in the same stills that supplied the Royal Navy for hundreds of years) from their Naval Rum Tub. The Tub only appears at the Cove one day a year. Also is their annual sale on real vintage 1960s Royal Navy Rum, in both imperial and Black Tot versions, just $100 per oz one night only.

You also could celebrate it at home if you have enough money to buy a bottle of The Black Tot Last Consignment or if you are lucky to have a bottle on your shelf. This last consignment of the original rum has been bottled from the original imperial gallon stone flagons into which it had been filled and sealed under HM Customs & Excise supervision in December 1970.

Here you could read a great review of the friend Josh Miller, a lucky man who tasted an ounce pour of that rum.

I won’t be able to attend to any of this celebrations and I don’t have enough money to buy a bottle of Black Tot…but I’ll celebrate it at home on my way…I have some navy rums on my shelf and I think that tonight I’m going to drink The Pusser’s Grog Cocktail in the way that the friends of The Floating Rum Shack suggests on their page. 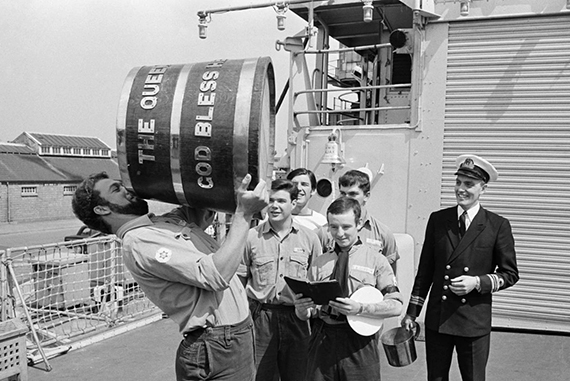